I have been asked more than a few times how I got the idea for the home checkup program.  As with most things, the answer is I had the idea after dealing with a difficult situation that impacted me personally.

One morning as I was getting ready to go to work, my wife came over to me and mentioned that something smelled foul in the hallway by the bedrooms.  I shrugged it off, blaming it on the kids.  We have 4 little ones and you just never know what exciting surprise they might bring into the house next.   To spite that, I emptied the hall bathroom trash can taking it outside with me just in case.

When I got home that evening the odor was gone and I was happy, thinking the trash was the culprit.  The problem was the smell returned a day or so later.  I searched and searched but never found the source.  The odor continued to come and go and I was starting to get a little frustrated. Eventually, one particularly warm day, instead of the foul smell  there was a bit of a musty odor.

Later that night it rained pretty hard and the following morning my daughter’s room was wet.  Very wet.

I immediately jumped into mitigation mode and began to pull the carpet back and dry things out. The water kept coming.  I probably went through 2 dozen towels.  Eventually however, it stopped. I opened windows, got fans and started drying the room. The last thing I needed was moisture in the walls.  My next move was to check the roof and attic.

I wanted to see if there was evidence of where the leak occurred, and sure enough, I saw water stains on the wood framing around the chimney and on the plywood roof decking.  I immediately decided it had to be the flashing around the chimney and proceeded to get up on the roof.  Once on the roof I noticed the flashing was worn and rusting and there were signs of a previous repair.

Frustrated with myself that I did not notice this sooner and do something about it, I took a note of what I needed to get to do the repair properly and headed down off the roof.  I decided that since there was no rain in the forecast and my week was already pretty full that I would wait for the weekend to buy the things necessary for the repair.  Problem solved,  right? 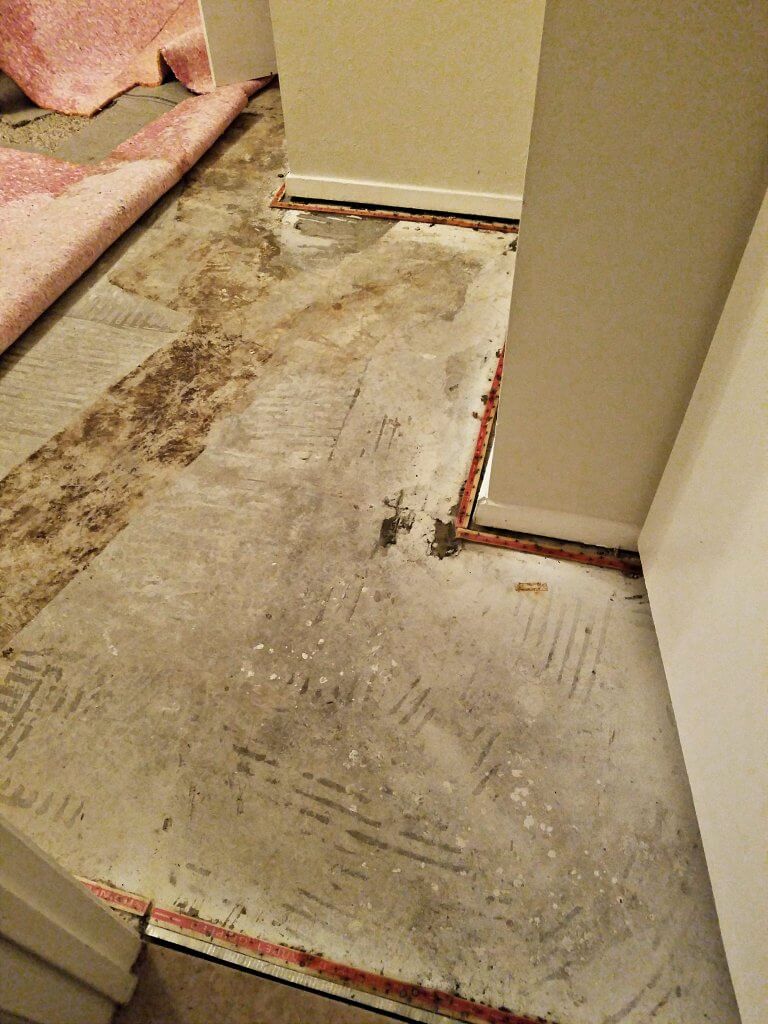 I woke up the next morning and went into my daughter’s room. When I stepped into the room, I had to blink. The floor was covered in water.  There was no rain last night?!  I immediately went outside to check the sky, the ground and anything that would show signs of rain.  Nothing made sense as everything was dry. No rain at all.  I even checked the weather. Nothing.

Houston we have a problem!

I decided it was time to call in an insurance claim.  There had to be a leak someplace.  So I called my insurance company and a local plumber and began drying the room again.  Within just a few hours, my house was abuzz with activity.

The insurance company sent a remediation team with dehumidifiers and fans. They took measurements and peeled back even more of the carpet.  The plumber was pressure testing the water pipes and tracing the lines under the slab with a line detector.  All the while the water kept coming.

When it got to the point where the remediation guys and the plumber were talking over the possibility of opening walls and digging under the foundation, I tapped the brakes and asked everyone to take a step back.

Sometimes when faced with a escalating situation it is best to calm down and look with a critical eye.  I took a good look at the hallway outside my daughter’s room.  I looked at the tape marks all along the wall where the moisture meters detected moisture in the drywall and realized that on the other end of the hallway was an old mechanical closet that was no longer in use.

It had long since been converted into a closet to house all the electronics that power our entertainment system.  When the closet was converted (prior to our buying the house) the owners put a false floor in about 12 inches above the foundation.  I never thought much about it and just assumed they put it there to cover up what used to be the old air return for the air conditioning system.

I got my power screwdriver and pulled up the false floor.  Hidden beneath it was an old drain that was still being used for the air conditioning condensate lines coming down from the attic.  No one knew it was there. It turned out that the drain had backed up and had been leaking into the wall for who knows how long.  We had water in the wall and the only reason we knew it was because it had finally gotten all the way to the other end of the hallway and found a place to escape the sill plate which had been damming it.

The erratic nature of the smell also was finally clear, you see, because the only time the drain backup was occurring was when the air conditioner was running.  In fact, if it hadn’t been particularly hot that summer, we probably never would have known and would have lived with water in our walls for who knows how long. 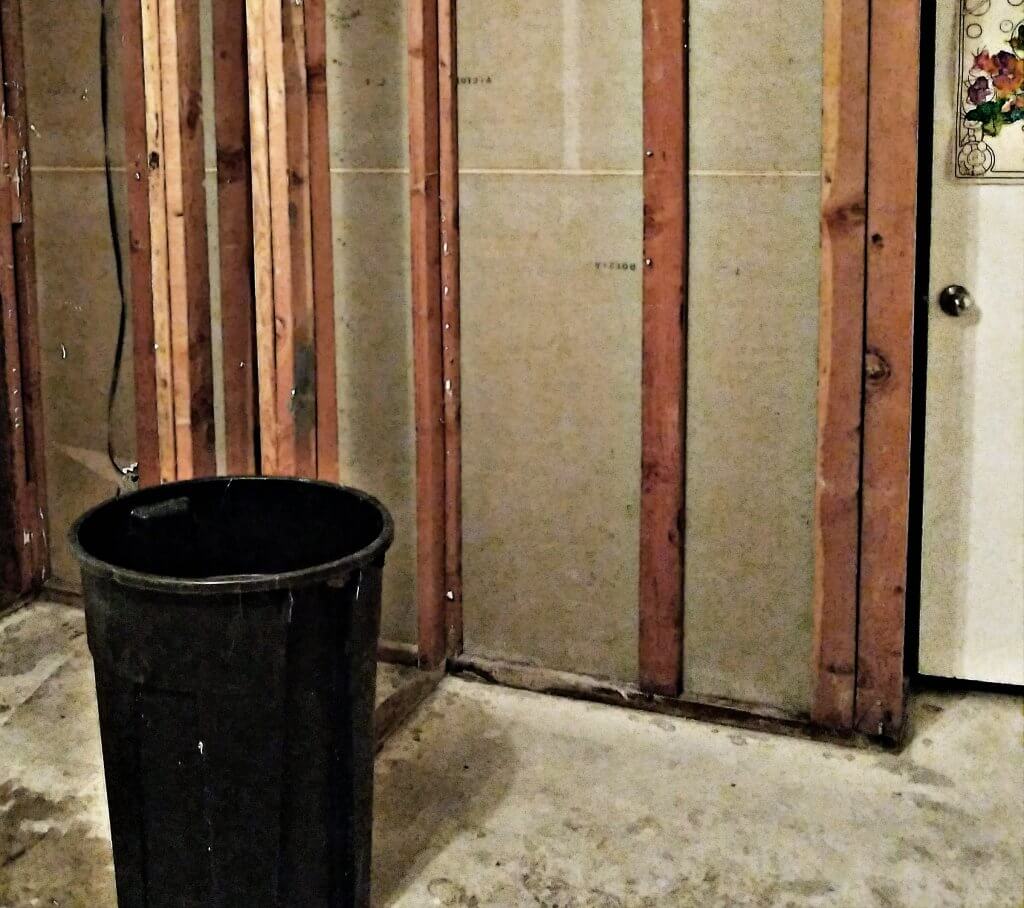 Well, now the repairs began.  My wife and I and our 4 kids lived in a one bedroom apartment for 4 weeks while the repairs were underway.  I think the most difficult part was sharing a single bathroom.  I was thinking there had to be a way to help prevent someone from having to go through something similar.

After looking at everything, I realized that a home checkup would have brought the drain to my attention to monitor or correct long before it became an issue.

It turns out the drain line was exposed, tucked into the corner of the closet and painted to match the wall.  A good home checkup would have caught the line running into the floor and told me to address it before it became a problem.

Moreover, my investigation alerted me to the additional problem on the roof which I was also able to address.

I realized that to be effective, a home check up really needed to happen multiple times a year, over time and it had to be affordable, really affordable.  So I designed a service to do just that.

House Fluent home checkup plans start as low as $29.99 / mo.  For that price we look at your roof twice a year, your HVAC 4 times a year (supplying you with new filters each time), and your electrical, plumbing and appliances 1 time per year.  We provide you with a report of the items we looked at as well as a maintenance log you can use to track any repairs which may be necessary.

See if a home checkup plan is right for you

Brian Botch
Brian is the owner of House Fluent Inspections and is licensed by the Texas RealEstate Commission as a professional real estate inspector (TX License # 22824 ).In addition, he is certified by the National Swimming Pool Foundation as a Certified Pool Inspector.

Brian is the owner of House Fluent Inspections and is licensed by the Texas Real Estate Commission as a professional real estate inspector (TX License # 22824 ). In addition, he is certified by the National Swimming Pool Foundation as a Certified Pool Inspector.

Beating Back the August Heat

10 Simple Ways to Prepare Your Home for an Inspection

Sell Your House With Complete Confidence.

Listing In The Next 30 Days

Take a peek inside our Wonderworld 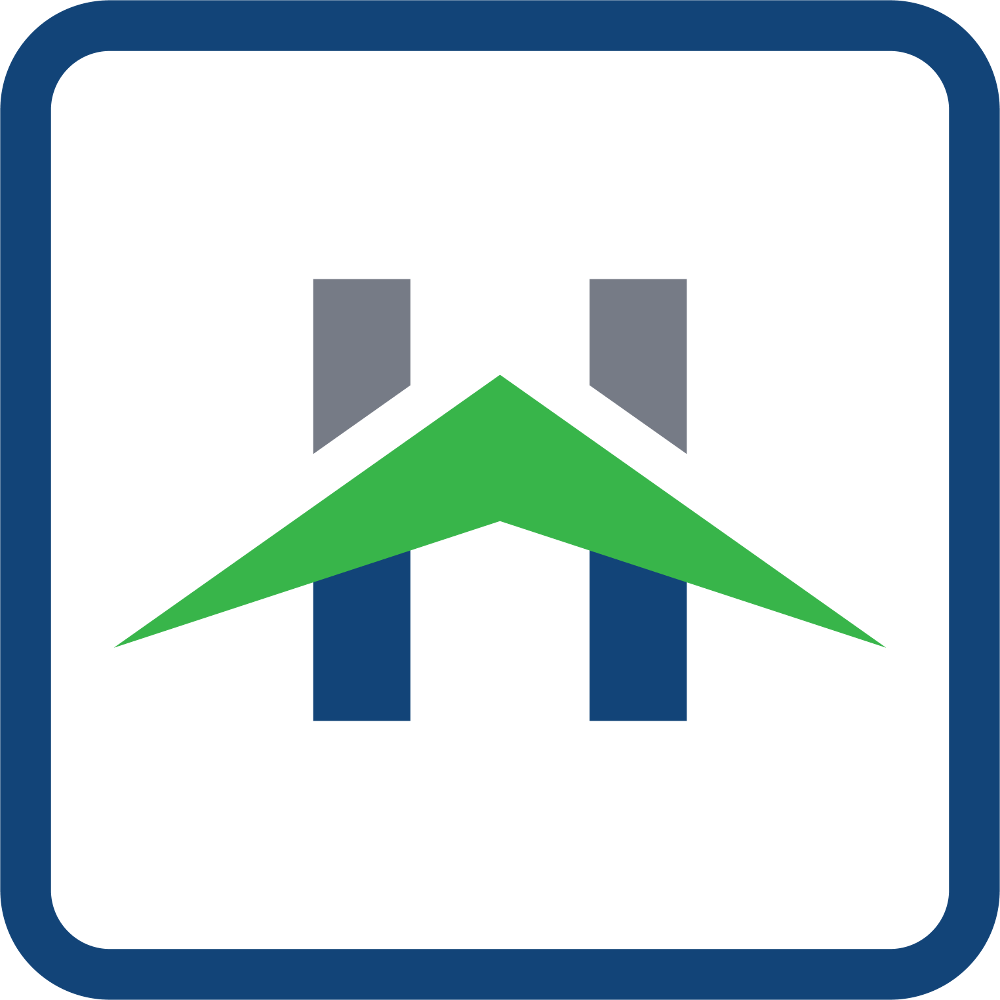 We Are Working On Your Branding Now!

You should expect to receive your branded content within 24 hours.  if you have any questions, just let us know info@housefluent.com

Looking for our home checkup plans?

Brian Botch
Brian is the owner of House Fluent Inspections and is licensed by the Texas RealEstate Commission as a professional real estate inspector (TX License # 22824 ).In addition, he is certified by the National Swimming Pool Foundation as a Certified Pool Inspector.